This document provides a guide to usage of OpenMP and availability of OpenMP on the HPC systems at LRZ.

An abstract description of OpenMP

OpenMP is a parallelization method available for the programming languages Fortran, C and C++, which is targeted toward use on shared memory systems. Since the OpenMP standard was developed with support from many vendors, programs parallelized with OpenMP should be widely portable.

The current standard document is that for OpenMP 5.0,, for the examples annex only the 4.5 version exists as a (separately published) document; this in particular extends OpenMP to apply to accelerator devices. Actual compiler support is now reasonably complete, however support for specific accelerator devices is heavily compiler dependent, which rather limits portability of code that uses the target directive.

From the operating system point of view, OpenMP functionality is based on the use of threads, while the user's job simply consists in inserting suitable parallelization directives into her/his code. These directives should not influence the sequential functionality of the code; this is supported through their taking the form of Fortran comments and C/C++ preprocessor pragmas, respectively. However, an OpenMP aware compiler will be capable of transforming the code-blocks marked by OpenMP directives into threaded code; at run time the user can then decide (by setting suitable environment variables) what resources should be made available to the parallel parts of his executable, and how they are organized or scheduled. The following image illustrates this. 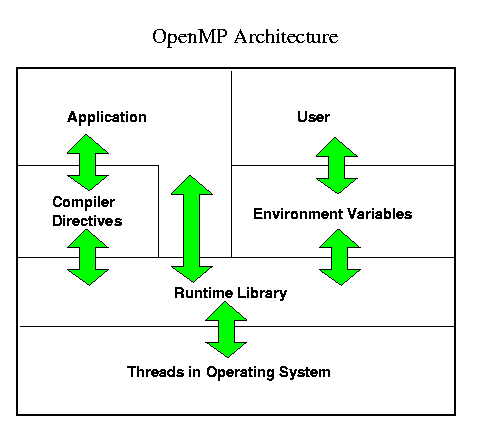 However hardware and operation mode of the computing system put limits to the application of OpenMP parallel programs: Usually, it will not be sensible to share processors with other applications because scalability of the codes will be negatively impacted due to load imbalance and/or memory contention. For much the same reasons it is in many cases not useful to generate more threads than CPUs are available. Correspondingly, you need to be aware of your computing centers' policies regarding the usage of multiprocessing resources.

At run time the following situation presents itself: Certain regions of the application can be executed in parallel, the rest - which should be as small as possible - will be executed serially (i.e., by one CPU with one thread). 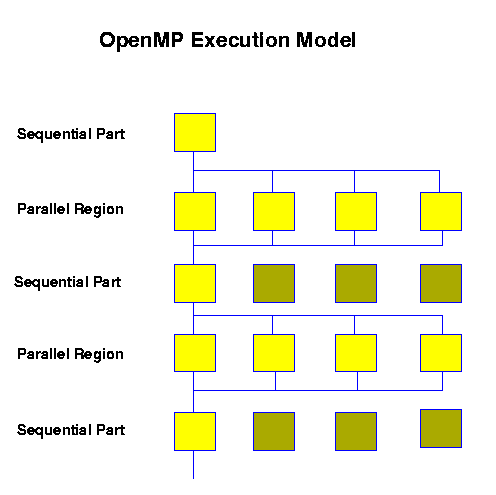 Program execution always starts in serial mode; as soon as the first parallel region is reached, a team of threads is formed ("forked") based on the user's requirements (4 threads in the image above), and each thread executes code enclosed in the parallel region. Of course it is necessary to impose a suitable division of the work to be done among the threads ("work sharing"). At the end of the parallel region all threads are synchronized ("join"), and the following serial code is only worked on by the master thread, while the slave threads wait (shaded yellow squares) until a new parallel region begins. This alteration between serial and parallel regions can be repeated arbitrarily often; the threads are only terminated when the application finishes.

The OpenMP standard also allows nesting of parallelism: A thread in a team of threads may generate a sub-team; some OpenMP implementations however do not allow the use of more than one thread below the top nesting level.

A priori the number of threads used does not need to conform with the number of CPUs available for a job. However for achieving good performance it is necessary to determine and possibly enforce an optimal assignment of CPUs to threads. This may involve additional functionality in the operating system, and is not covered by the OpenMP standard.

Comparison with other parallelization methods

In contrast to using MPI (which usually requires a lot of work), one can very quickly obtain a functioning parallel program with OpenMP in many cases. However, in order to achieve good scalability and high performance it will be necessary to use suitable tools to perform further optimization. Even then, scalability of the resulting code will not always be on par with the corresponding code parallelized with MPI.

On high performance computing systems with a combined shared and distributed memory architecture using MPI and OpenMP in a complementary manner is one possible strategy for parallelization ("hybrid parallel programs"). Schematically one obtains the following hierarchy of parallelism:

Note that the hardware architecture may also have an influence on the OpenMP parallelization method itself. Furthermore, unlimited intermixing of MPI and OpenMP requires a thread-safe implementation of MPI; the level of thread-safeness can be obtained by calling the MPI_Init_thread subroutine with suitable arguments; depending on the result, appropriate care may be required to follow the limitations inherent in the various threading support levels defined by the MPI standard.

Please consult the Wikipedia OpenMP article for such an overview.

Remarks on the usage of OpenMP

OpenMP enabled compilers are available on all HPC systems at LRZ:

For activation of OpenMP directives at least one additional compiler switch is required.

Please specify this switch for all program units that contain either OpenMP directives, or calls to OpenMP run time functions. Also, the OpenMP switch must be specified at link time.

Before executing your OpenMP program, please set up the OpenMP environment using one or more of the variables indicated in the following table.

This will execute the OpenMP-compiled binary "my_openmp_program.exe" with up to 8 threads.

Stub library, module and include file for Fortran

In order to keep code compilable for the serial functionality, any OpenMP function calls or declarations should also be decorated with an active comment:

Note that without the IMPLICIT NONE statement and missing declaration OMP_GET_THREAD_NUM has the wrong type!

If you do not wish to do this, it is also possible to use

for compilation of the serial code. For linkage one also needs a stub library. All this is provided in the Intel compilers via the option -openmp-stubs, which will otherwise produce purely serial code. The above code can then be written as follows: